Cast of Characters - Demetrio Chardonnay
If the city had an award for Least Effective Criminal, Demetrio Chardonnay might very well win it. He practically defines the term "petty thief."  A hold-up man who specializes in liquor stores, Chardonnay is always caught shortly after he departs the scene of the crime. 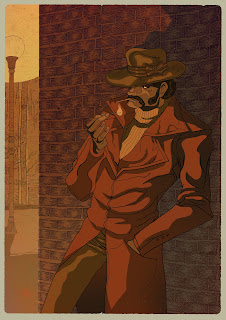 So you can imagine the surprise when Uncle Detective found out that Chardonnay was behind the heist of a shipment of very expensive wine and beer.  Our narrator trailed Chardonnay to the abandoned Blue Plate Factory where he saw some crates being loaded into a building everyone believes to be empty.
Has Demetrio Chardonnay been reading The Seven Habits of Highly Effective Criminals?  What's this Academy he talks about?
Who gets a cape when they graduate college?
And what exactly is going on at The Blue Plate Factory?
Posted by Bruce Adams at 11:58 AM No comments:

You better believe I am going to look into this some more
The Ideal Palace of Postman Cheval was planned for twelve years and built for thirty-three. Like many of the concrete parks of Wisconsin (a topic for further posts, to be sure) it was constructed by hand with materials salvaged by the builder.  You can read more in the great Stopping Off Place blog.
As Facteur Cheval said, "Let those who think they can do better try."
Posted by Bruce Adams at 9:37 AM No comments: 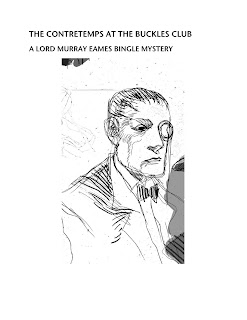 I've completed a short story featuring the crime-stopping
aristocrat himself, Murray Eames Bingle and his butler duck Muddles.
It's available here in the ePub format.  Or you can buy a copy at Amazon.com for a measly 99 cents.
Lord Bingle expected a simple dinner with friends at The Buckles Club.  Instead, he was witness to a terrible murder.
How can Lord Bingle free his friend Aubrey Hide when he, and everyone else, saw Aubrey stab someone to death?  Or will Inspector Gage of Scotland Yard take young Hide straight to jail?
Posted by Bruce Adams at 12:51 PM No comments: