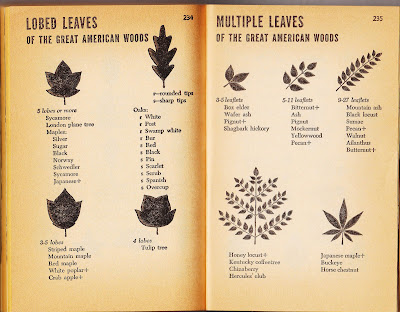 As I think about how a paperback copy of Rod Crenshaw's best-selling work on the identification of Elves might look, it occurs to me that most of us (even the most skilled and highly trained in elf-spotting) will probably only get a fleeting  glimpse of an elf or elves.
And even then, we would be lucky to catch a silhouette or shadow.  So something like this page from A Pocket Guide to Trees; How to Identify and Enjoy Them by Rutherford Platt (Washington Square Press, 1960) would probably be very useful.
As we'll see in Book Two, the sudden commercial success of a book originally intended for a scholarly audience will have implications for not only Rod Crenshaw but possibly even Manny Tippitoes.
And there's something else in Rutherford Platt's Pocket Guide that I want to share with you later.